I’ve begun to hear from some of you commenting upon earlier columns. In particular, several have asked about ways of getting started with measurement so as to help you decide when to add a partner to your group or when to intervene with a partner who is only seeing one-half as many patients as the other group members. In the second example just noted, if you are actually measuring the “one-half as many” you’ve already started your measurement. If it’s merely an impression, than you are yourself raising barriers by asserting the ratio without the evidence. Correspondents have asked me to recommend a text or other literature that they could peruse to educate themselves on the measurement of physician performance. Unfortunately, almost nothing is available that has been actually validated in practice. Yet, models with some face validity may be found, mostly among consulting organizations.

My hospital recently employed a consulting group as part of an external assessment of our medical staff credentialing and peer review processes. At an instructive presentation at our executive committee meeting the consultants proposed a “pyramid” for medical staff development. While proposed for the general medical staff, applicability to any department, including my own was obvious.

The pyramid (figure 1) begins with the obvious: Get the best people you can onto your team. Since I’ve only one column this month, we’ll leave recruiting for another time. The interlocking components of setting expectations, measuring and giving feedback are the key components of the change process. Like you, I believe that most physicians want to “do the right thing.” Unfortunately, most of us are increasingly uncertain as to what the “right thing” is these days, which is why clearly setting expectations is so important to beginning measurement.


Let’s face it, what I am talking about goes by many names, but measuring productivity is a component of physician profiling. By itself measuring physician productivity is value neutral, but as I’ve previously written (April 2000, EMN) productivity measurements can be used as a bludgeon or as a teaching tool. Unless the three stages of setting expectations, measurement and feedback are in place, jumping to “managing poor performance” or “corrective action” is simply bludgeoning your staff. Thus, if some measurement of physician productivity is put in place it must be implemented based on some clearly articulated expectation of productivity. Well, what shall we use? Probably, the most widely used measure is patients per hour (PPH), which is also the most easily measured. While I do not think this measure has as much value as another—I prefer to measure relative value units (RVUs) per hour—I’ll discuss how PPH might be measured since so many of you have expressed interest.


Several sources suggest that 2.5 PPH is an appropriate benchmark of physician productivity.[1],[2] But is it? Should you even set a benchmark? Or should you develop baseline information in your local environment first? I derive my answer from the pyramid, which suggests that measuring and comparing to articulated expectations is the desired process. Given the uncertainty of what constitutes appropriate productivity despite the references cited below and the excellent discussions by Tom Scaletta, MD at the AAEM web site (see "Rules of the Road Q & A) and elsewhere including the emergency medicine internet mailing list (subscribe by sending “sub emed-l” to LISTSERV@itssrv1.ucsf.edu), I believe it is far more important to measure your own team’s productivity over-time before setting your own baseline rather than subscribing to another’s. For example in our adult acute area having measured our PPH for more than two years we still see a PPH of less than 2.0, but then our admission rate in that part of our ED nears 45%.

Returning to my correspondents’ questions, how shall we measure PPH? An easy route to measurement of PPH is asking your billing contractor to provide your patient volume by physician for the dates of service of interest and count your scheduled clinical hours over the period for which you’ve measured patient volume. Measure PPH for a month at a time or at least for a period that includes approximately 150 patients and track results over a minimum of six months before making any decisions. Graphing the results of PPH, RVUs/hour and RVUs/patient against the 20th, 50th and 80th percentile for the group tells quite a story (figure 2). Besides as the pyramid advises us, feedback is the next step after measurement. More on RVUs next month in Part II. 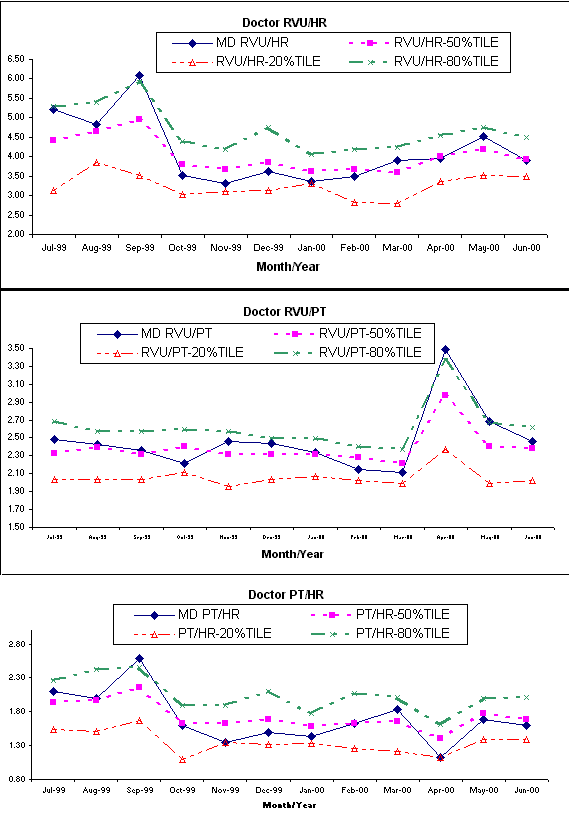 Most physicians, provided the monthly graphical feedback about PPH described above, will over time adjust their performance to the mean of the group. When this productivity measure (or RVUs/hour) is coupled with measures of patient waiting times or throughput intervals and measures of medical staff and patient satisfaction then decisions about improving productivity or altering staffing will become apparent.

What about the physician who does not come into line? The physician who insists that her or his patients are more sick or complex or otherwise more difficult to evaluate? Relative value units per hour more closely reflect the patient complexity by more directly measuring the physician work done in patient care, but RVUs are harder to measure. Yet, conversion to this measure should not be the answer, rather reaffirmation of the expectation clearly articulated at hiring and through regularly scheduled reviews and meetings assures that the physician is identified as non-compliant with the expectations s/he had earlier agreed to. Unfortunately, counseling or disciplinary corrective action may be required after a sufficient period of monitoring without response.